Interesting fact: In 2003, the first business leader hosted by the AGSM in the inaugural Meet the CEO event was Richard Branson.

It was somewhat poetic, therefore, that almost exactly a decade later the last Meet the CEO event of 2013 held on Monday featured John Borghetti, CEO of Virgin Airlines. 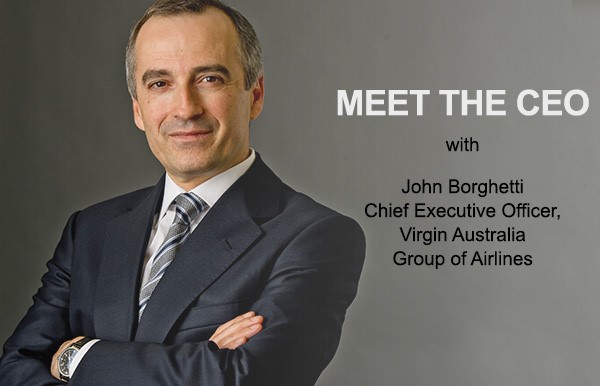 The stage was set from the beginning. There were a number of immaculately groomed Virgin Airlines stewardesses in their distinctive red livery in addition to the AGSM staff welcoming guests to the evening. They even opened the doors to the hall where the interview took place, and ushered us in with effortless smiles and practiced efficiency. I almost wished we had reserved seats so we could have been directed to them.

Dean of the Australian School of Business Professor Geoffrey Garrett was engaging and humourous as always in his introductions. UNSW Chancellor David Gonski in his welcome was even funnier and had the packed hall laughing out loud. The twist – instead of Dr Garrett chatting to the guest as usual, there was also a guest interviewer. Mark Scott, Managing Director of the Australian Broadcasting Corporation stepped onto the stage and masterfully conducted the interview.

You can watch the video recording of the interview to catch the whole thing, but here are my observations and insights about John’s leadership style from listening to him tell his stories.

Don’t be afraid to be yourself.

A lot of John’s personality showed through his answers. I’m sure he’s had loads of media training as most people at his level do, but his answers were somewhat less reserved and guarded than the other CEOs I’ve seen interviewed.

For example, he quite happily pointed out that the decline in the Australian resources boom was great, because it meant that mining organisations were now looking for cost efficiencies and open to renegotiating corporate contracts. He then realised that it may have sounded like he was happy about the resource decline in general, and sheepishly clarified that he meant it was great for Virgin Airlines, not necessarily for Australia as a country.

He talked about and shifted credit away from himself and senior management to front-line staff. Basic leadership recipe, but well executed by publicly acknowledging the importance and achievement of everyone in the organisation.

If you’re in a service industry – like airlines – focus on getting the right people on board (no pun intended).

John pointed out that when you’re flying, you’re basically in a “tube”. The tube is essentially the same regardless of the airline you choose, so the key differentiator is the people who deliver the customer experience.

When asked to elaborate, he said it came down to recruiting well. You have to create and maintain a service culture, and find and attract people with the right customer service attitude and focus. This meant going outside the airline industry to find individuals who were “service people” – whose attitude is based on wanting to please people.

It’s also important to then let those people be themselves, and not beat that attitude out of them.

Advice from Richard Branson when faced with rebranding Virgin Airlines Australia differently from the rest of the global Virgin brand. Enough said.

Listen to your front-line staff.

John said that it was impossible for a CEO to “go undercover” and pretend to be a customer. Everyone recognises you and treats you differently – like the CEO. Even if they didn’t, at best you might pick up on some of the challenges faced by front-line staff on the day, and those might not be the most difficult ones they normally face. Rather, spend time talking to them at every opportunity you get, take that feedback on board, and act on it.

Process your email backlog at 3am on Sundays.

Ummm … I might pass on this one for now.

John started working in his father’s coffee shop aged 10, and was challenged by him to up-sell to potential customers. It was here that he learnt salesmanship and reading people. He pointed out that this is important because it enables you to understand where they are coming from (empathise with them), which in turn gives you the ability to decide what to do (how to fulfil their needs).

Have a good process to solve problems.

You can’t anticipate all the problems that could potentially arise in an endeavour. However, you know that they will come up, so have a good process to deal with them as they do. Each problem might be different, but having an approach to solving them will go a long way to successfully resolve them.

Work hard and focus on doing a great job.

When asked what advice he had for someone starting off in the airline industry, John responded with the advice he gave his own daughter, not specific to airlines, but for careers in general:

Work hard. Focus on your current job and do it well. You will see other people around you get ahead without working hard. Don’t worry about them. They’ll come crashing down eventually.

Thanks AGSM. Really enjoyed the conversation, and am looking forward to meeting more CEOs next year.