I was asked an interesting question recently:

“When someone comes to you with an issue, how do you determine whether it’s a reason or an excuse?”

I think that the answer is largely a matter of perspective, the situation and how the problem is positioned. Semantically:

Reason: (noun) A cause, explanation, or justification for an action or event.

Excuse: (noun) A reason or explanation put forward to defend or justify a fault or offence.

If someone comes to me and just says that something can’t be done because it’s too hard, too complicated, will take too long, will cost too much or the technology just doesn’t support it yet, it feels like an excuse.

However, if they make the same argument and recognise why it was important to do the task in the first place, and what alternatives could be used to achieve the same outcome, I consider that a reason.

However, it’s all contextual as well – what the issue is, what the ramifications of not resolving it are, what my working relationship with the person relaying the issue is like, and whether or not they are actually capable of resolving the issue on their own. 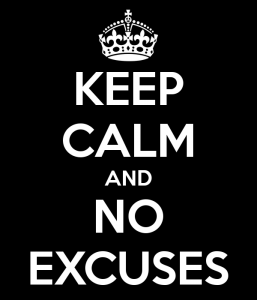 Having said that, the more important thing is not the theoretical comprehension of the distinction between the two, but how self-aware you are in applying it to yourself.

Last Sunday – which was unusually windy – I noticed my five year-old hanging out around a window and looking out quite excitedly. He came to me and asked if we could go to the park near our house and fly a kite. My response: “Daddy’s a bit tired, so let’s do it some other time.”

Then I realised that I had just given him an excuse, and even though he’s only five, as his dad I need to practice what I preach and teach by example. So I went and found him watching the wind buffeting the trees outside, sat down on the floor next to him, and explained to him that if we went to fly the kite that day, Daddy would get even more tired and he wouldn’t be able to do all the other things that he needed to do. However, we could print out some arts & crafts templates and do a small project together.

The result: a similar outcome to what he was after – spending time with me doing something he enjoys, while I was able to turn an excuse into a reason.

Added bonus: Without going all philosophical, learning how to manage relationships starts at home – the most important organisation in my life. I always instinctively knew this, but first came across an eloquent articulation of this idea in Clay Christensen’s July 2010 HBR article called “How Will You Measure Your Life?” While Christensen, a Harvard Business School professor, is better known for writing the book on disruptive innovation (The Innovator’s Dilemma), his article and the book that followed (also called “How Will You Measure Your Life?”) provides great advice on how to achieve a meaningful career without compromising on your values. Definitely recommended reading.

Since the weekend, I’ve been watching my own behaviour pretty closely, and thankfully haven’t had any other instances of excuse-making.

So … what’s your reason?